In “Cultivation”, I imagine the future on my terms – taking back agency in sci-fi, a genre where I didn’t see many characters I could connect with while I was growing up. In a speculative world not so far in the future, humans have narrowly avoided total ecological disaster by shifting their main power source to the power generated by neurons in the brain and nervous system. If one could increase the rate of neurons being transmitted at the scale of the entire human population, people could generate a good amount of power.

The global population was encouraged to cultivate energy through pursuits such as spiritual practice, science, the arts, all forms of physical and mental stimulation. New ideologies and new branches of religions formed in response to this massive shift. One of the spiritual sects that came into being became known as neo-Daoism. Neo-Daoists believe in cultivating their life force, known as 气(qì). There is a physical component to the practice – cultivation also takes on the physical task of generating power in this world. 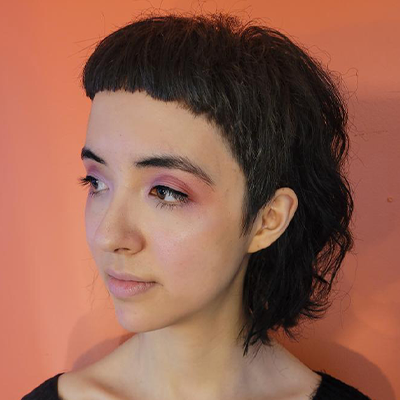 Kyla Yin James (they/she) is an illustrator and designer whose work is inspired by mythology, the unconscious, subcultures, and sociopolitical systems. They love exploring their connection to intergenerational experiences. Kyla’s work is filled with symbolism that creates surreal and speculative scenes questioning the status quo. They have a mural on display as a part of Vancouver Mural Fest and are currently working on their debut graphic novel. Kyla’s work has also been featured on Creative Boom, Ricepaper Magazine, and Loose Lips. Kyla’s creative collaborations include working with The Writer’s Union of Canada, InwithForward, Vancouver Foundation, Good Night Out Vancouver, and the James Black Gallery.

Through their work, they explore the ways they approach the different thought worlds they grew up in. Kyla describes their practice as thinking and feeling out loud, sorting through the symbols and ideas they’ve encountered.